Tsusiat is the newer version, about 6”+ wider and longer over the original.  It has a single Ford-Lehman 135 HP engine.  We purchased her in February of 2020 just before the World imploded.  We looked at many GB 36’s and 42’s but were fortunate enough to wait until Tsusiat (Suzy for short but named after Tsusiat Falls, a waterfall on the West Coast of Vancouver Island).  She was in spectacular condition having been babied and kept in a covered shed most of her life. The varnish was in great shape but already needed a new coat (which I just completed).  She was missing a lot of electronics, however so we spent a lot of time and money with upgrades to new chart plotters, speed/depth, inverters, battery chargers, Galvanic Isolators, Balmar high output alternators, voltmeters…the list goes on for awhile but you get the gist. 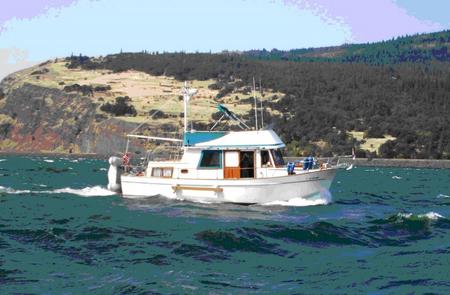 The Pegasus 22 was a 22.5’ long performance rowing shell I designed, built the plugs and molds plus the first two boats for a client in the SF Bay area.  She was designed to race in longer distance races across rough water from places like Berkeley to SF, SF to Marin, Alameda to SF, that sort of thing.  I therefore designed her with a bit more freeboard and fuller section shapes for greater reserve buoyancy in waves than other single shells.  She set 4 records for her class so she was very fast.  My boat is hull #10 from the production run and was rowed extensively for awhile but fell on to concrete then filled with water causing extensive damage, I am just completing the repair after many years in pieces.  There were several tears and fractures totaling more than 10’.  Her livery now is white with metallic green and green pearl clear coat. Type your paragraph here. 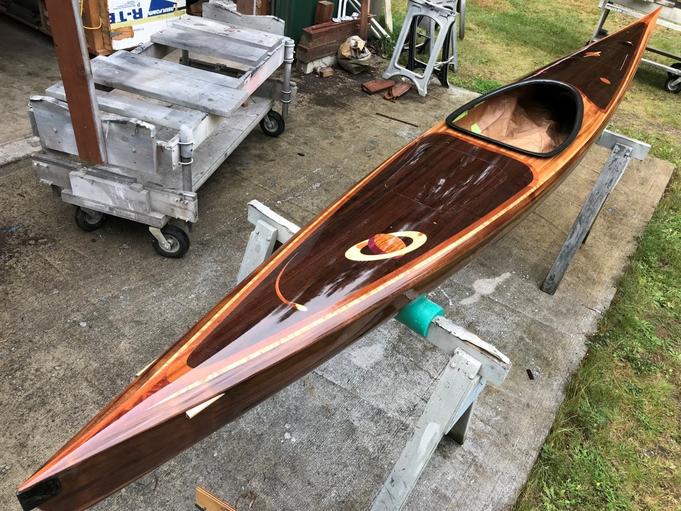 For Boaters, By Boaters

I’ve had Maxine for 16 years.  I’m the third owner and absolutely love this boat.  She’s much more reliable than I am.  (Any problems she’s had have been directly or indirectly my fault!)  She is a tri-cabin layout with two full heads; fitted with a single 120 HP Ford Lehman diesel motor; I’ve updated the electronics and added a diesel heater for our cooler weather. 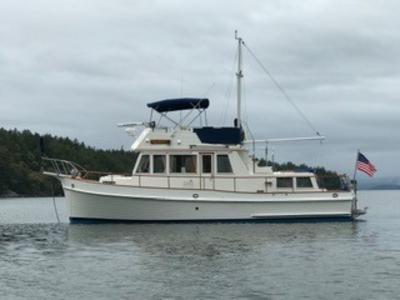 We were extremely fortunate to have our good friend and member of the Pt Wilson Sail and Power Squadron , Gordan Lacey, as an electrical expert, install all of the new toys.  She can do 9 knots but is most happy at 7-7.4 using about 1.75 GPH and 1600 RPM.  With her 400 gallon diesel tank, that gives her the potential to motor to Alaska and back on a single tank of fuel.    We are still trying to get used to central heat, hot and cold pressure water, showers (2) berths that are comfortable and warm, microwave ovens on board and fresh water flush heads after years on a racing sailboat!

My late wife Becky and I have cruised in Maxine all over the Pacific Northwest including twice to SE Alaska (4 month trips) and twice up the Columbia and Snake Rivers to Lewiston, ID. The photo was taken on the Columbia River near The Dalles and that strange board on her topside is to keep her off the wall of the locks (eight each direction!).  Maxine is not a fast boat (7 knot cruising speed), but is very efficient using only 1.6 gallons/hour at that speed.  I’ve spent way more on her maintenance than her value, but hey, it’s a boat and I love boating on her!

These are 17’ kayaks made from full length strips of wood about ¾” wide and 3/16”thick routered with a convex edge that fits into the concave back. They are very light at about 40 pounds.  The strips are bent over frames, sanded and fiberglassed then finished in clear urethane “car paint”.  I built these from large planks of rough sawn wood that I ripped and routered myself.  I was reluctant to design my own boat from scratch since I didn’t have a lot of experience in kayaks so I took the offsets from an existing designed that followed my design philosophy or reserve buoyancy, entry angles and such and made it my own.  From the hull offsets, I designed my own deck and did my own style construction.  The first was Linda’s kayak made from Sapele, Western Red and Alaskan Yellow Cedar, Peruvian Walnut and Bird’s Eye Maple.  For my own, Celeste, I wanted to explore more areas of woodworking so I had 16 woods in her construction and did 19 inlays of planets, moons and comets.  The topsides of Celeste is from a single 22’ x 8” x 2” plank of Clear and Dry Western Red Cedar that I selected for what I thought might be interesting figuring of the grain then seasoned it for 4 years.  The strips were book matched and sequentially routered so that the cherry wood pink on the bow and walnut brown stern were laid in the hull the way they came from the tree.